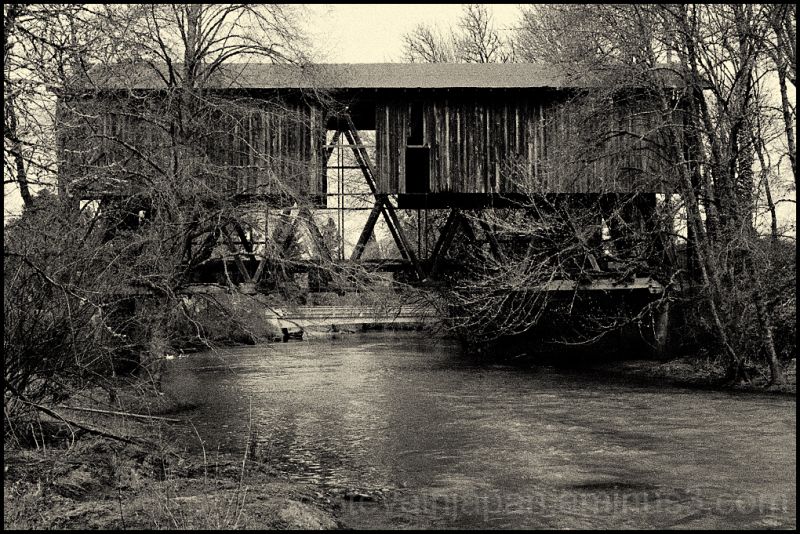 Posted by Steve Rice (Olympia, United States) on 8 April 2009 in Architecture and Portfolio.

In preparing for this series, this is the bridge that caught my fancy, a railroad bridge. Built in 1925 for a logging spur that brought logs to the Frank Chambers Mill in Cottage Grove, OR, USA, the bridge crosses the Coast Fork of the Willamette River. It's 78 feet (23.8 meters) long and is of the Howe truss type. Quite simply, it's massive to support the weight of a loaded log train, like this perhaps. There are eight, four per side, hand hewn beams running the length of the bridge. They were hand hewn because the wood fibers would have been crushed by saw mill cutting of the lumber making the absorption of moisture easier. Pairs of beams running perpendicular to the main supports carry all the additional supports necessary for the rails.

Unfortunately, the Chambers Mill burned in 1943 and the bridge was abandoned. It has been slowly decaying since then and is in sad shape. The beams carry the scars of unsuccessful attempts by arsonists to burn it down. The entire structure leans to the right when viewed from the front. I'm glad I saw it before it's gone.

And we are glad you captured this to share with us. These bridges carry a wealth of history with them, and it is sad to see it left to decay. Beautiful capture, love the rustic feel.

Peggy M. from somewhere in, France

Magnificent treatment of the image and this wood which has ages gives me bcp of emotion. Very beautiful photo !

nice view from below on that wood bridge, great b&w

nice one bw...i like it and i see that even covered time was stronger

Shot from a different angle and no less interesting, great capture

Beautiful angle and nice choice for black and white.

A nice piece of history Steve, and you have recorded the old bridge before its gone. Wonderful historic shot.

What a scary looking place. Looks like a frame out of a war movie or something, moment before the back blast.
Great sepia/black and white processing, give it a classic look.

Nice capture and tones. It looks like a wonderful place to explore with so much history. The detail and story is appreciated, thank you :)

Awesome b/w, love the light in this.

why that reminds me of a covered bridge by Portland

these timber bridges have a story, I know, their usefulness for us there is the aesthetic value, they are so well integrated into a natural landscape. They bring poetry and romance ..
Here, I see that it was used for a railway line and that it is no big thing .. the time was right for him .. But I am glad that you have been able to make this picture story.

Great shot. That is one dynamite spot.

A fine capture of this beautiful but sad covered bridge. Hopefully someone will recognize the value of restoring this one day before it's gone.

Beautiful capture, Steve. The old bridge doesnt look like it will last for long.
I am loving this series.

Oh, love this one... very old and partially destroyed but lot of charm & interest.

Tone is so befitting to the whole scenario. And the scenario is just classic.

Nice composition, like they way you frame this shot.

I think that is the best of all the images you post from hat bridge - I like very much the pov, the reflections and the tonality

What a cool looking old bridge, good idea to capture them all now as a historic record.

They should be "classés monuments historiques à l'Unesco"

So old and still hanging in there ... beautiful old bridge and the post processing matches the age!

Thanks very much for posting this beautiful bridge so genuine. The b/w works wonderfully here. Congratulations.

EYES WIDE SHUT from The library of my soul, United Kingdom

Such a shame that it ends this way. Makes for a gorgeous composition, but as you say, it will probably soon be removed. There should be a preservation order on such historic structures and grants to rennovate. We are losing our history and heritage the world over.

Gorgeous in B&W, Steve ! And the vantage point you chose is perfect. Very moving story you tell about that bridge. Love these relics of the past and you image lets us picture the ones who used to travel by this bridge...... I can see them !

Terrific shot and thank you for sharing the history.

I'm glad you saw it and captured it too. The tangle of shrubs really adds to the sense of abandonment and being reclaimed by the forest.

Stef67 from in my head, France

Firstly, a very fine photograph beautifully presented. The toned b&w feels very respectful of the history. And, what a history . . love these only covered bridges and the story that so often goes with them. 5* stuff.

I thought at once of the magnificent film " On the road of Madison " with this bridge, this meeting... Very beautiful cliché,sepia drawing gives him a proud speed Bravo!
lô

I like your series of bridge images, and flowers too. The duotone of this photo really captures the feel of the period. Well done.

I am glad you got it and shared with us while it was still there, superb capture, this must have been quite amazing to see in its prime

I really like this one better than the next...
It reminds me "Down by Law" ...

Nice processing. Thanks for the history.

Nice. I bet you had doubts wether to present it in color or BW

I am working on the restoration of this bridge

@Ryan: That is great news! I wish you well and hope to see it when restored or during restoration. Maybe, i could get a few shots of work in progress.