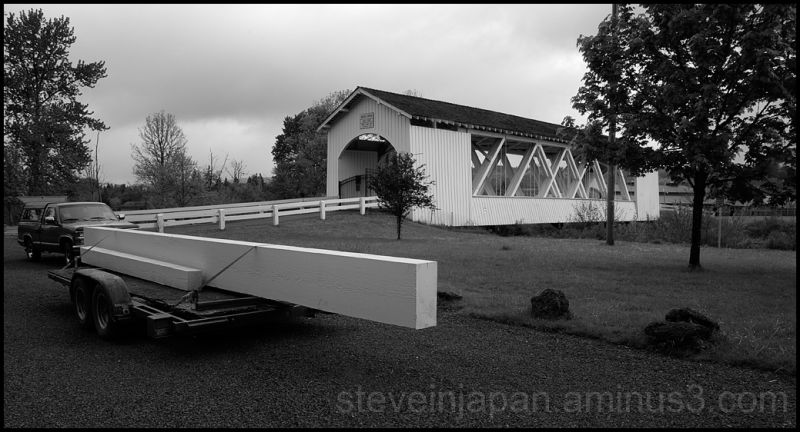 Built in 1937, this 120 foot (36.6 meter) bridge of the Howe truss type spans Ames Creek in Linn County, Oregon, USA. It carries no vehicular traffic, on a routine basis, but is located in a park in Sweet Home, OR. When I was visiting, the bridge was undergoing what looked to be some minor repairs. I saw a fairly large truck hauling supplies drive across the bridge. The beams in the foreground are part of the repair project.

For the first fifty years of its life , the bridge spanned Thomas Creek. By 1987, the bridge had been bypassed, allowed to deteriorate, become a safety issue, and was slated for destruction. Thanks to the heroic efforts of Oregon covered bridge enthusiasts, the bridge was saved and rebuilt on Ames Creek.

This one is a singular one, I like veru much the wide open spaces on the sides. I would like to see more of this particular bridge :)
I like very much the b/w and the framing with the ocasion of the repairs.

Love the "windows"on the seid of the bridge! Very fine composition and excellent b&w!

It's great that these bridges are being cared for, an important part of local heritage.

Looks like you paid a visit on a right special day for the bridge. You have one of the best photo-series going with these covered bridges, Steve.

Lovely shot full of interest...thanks for the info!

A fine looking bridge. I'm glad it was saved and restored. It makes a fine subject. Excellent range of tones in this image.

under reconstruction :-), very nice one

Thanks for the commentary. Neat shot.

Nice lines throughout this frame Steve. There is a subtle drama in the tones that makes one stop and take notice!

beautiful! so much history behind that bridge... great work!