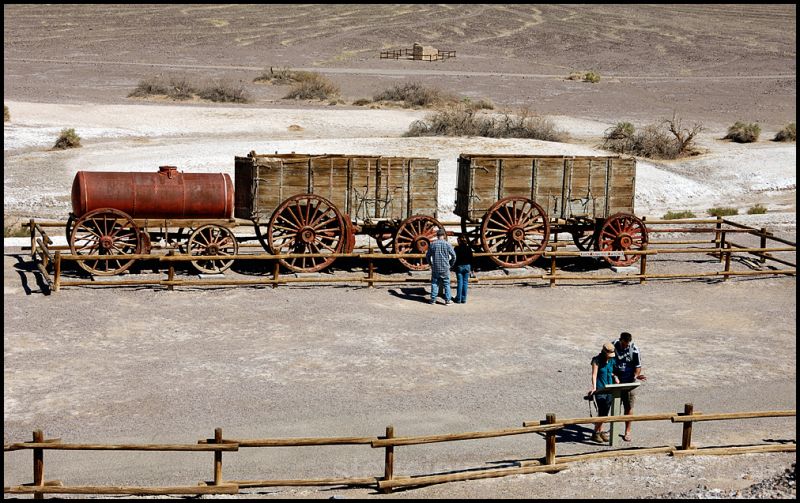 It took large teams to pull the wagons loaded with refined borax. The combined weight of the two wagons and water tanker was 36.6 tons (33.2 metric tons). The teams were usually made up of two draft horses and eighteen mules. The ten day journey was one of 165 miles to a railroad spur in Mojave, CA. The twenty mule teams earned their place in the lore of the Old West.

What a document, Steve! Hard to think to be oneself making the journey!

Steve this is just outstanding...from the fence in the foreground to the little fenced in structure in the distance and the wonderful carriage in between...wonderfully muted tones and great sense of scale...great work!!

How emblematic, symbolic of the american history. Incredible will to go west in such conditions. They were brave really and I suppose push by the hope to find a land of promises.

Your report is really very interesting for us Steve, a little of history of the America which comes to light every day.

Peggy M. from somewhere in, France

wow . . the narrative paints a picture in itself here. Can feel the history just looking at the shot.

Wow I am old enough to remember the old tv series "Death Valley Days" and I remember the photos. This brings back lots of memories.

@Viewfinder: Yes, I remember that program, too.

this an amazing picture of times gone by added to by your narrative, superb

Is this what they used to call a wagon train...? great historical picture, but it must have been a hard life for those mules.

@Michael: Wagon train refers to the convoys of horse-drawn covered wagons the settlers used. I must agree that the setup above does look like a train of sorts.

@Don: I can't imagine undertaking such a journey. The mules were pretty smart though. More on that tomorrow.

Stef67 from in my head, France

where is John Wayne? love the tones in this photo!!!!

Hard labor for those mules and horses too and that under those harsh circumstances! Love this view on the grounds, beautiful color toning and post processing.

Enjoy very much how you composed this shot, Steve... your play of light and tonality is marvelous, as always! Thanks too for the information! Wonderful tour!:-)

fantastic photo and information too. I still use 20 Mule Team Borax! Gosh, now that you've shared that bit of history, I had no idea the heat those poor animals had to endure.

This looks like something that belong in a Western movie. A great shot. Superb composition and POV

Francesc B. from région parisienne, France

Another movie ??? Where is John Wayne ??? ... very interesteting explanations.
I like the colors here.

Great historical detail and the perfect image to put in a book!

A great POV that illustrates history well. Thank you for the narrative information as well.

I'd have loved to visit that place with you, really feel we're back in times !

Wonderful documentation Steve....and beautiful shots of these wagons too!