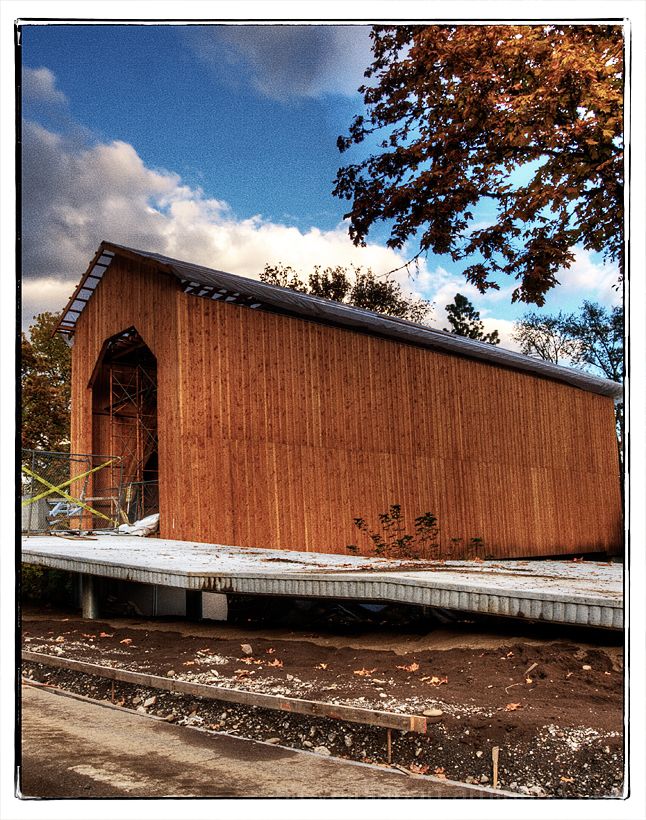 When I shot the Covered Bridges of Oregon series, the bridge that fired my imagination was this bridge which was in sad shape as can be seen here and here. Since then, the city of Cottage Grove, Oregon, owner of the bridge since 2006, got a grant of $1,315,370 from the National Historic Covered Bridge Preservation Program. Along with the city's matching funds, resources were available to rebuild the bridge before it collapsed into the river. The city also acquired the land on the east side of the river and will make a park accessible, for foot and bicycle traffic, by way of the reconstructed bridge. I hope to make it to the dedication and reopening of the bridge on December 3, 2011. This photo was taken in early November, 2011.

Magnificent! And I always enjoy this series. I am glad that some history is being preserved.

Grainy blue sky is not often to see in your picture..it gives nice feelings of the historical building

Magnificent tones for this image! It is a beautiful construction!

on the picture of the 9.4 I can really see the height of this bridge ! It's a beautiful place

Nice documentation of the bridge.

Ah, yes, I remember your earlier postings on this. Great news and I so hope you make it there on the 3rd !

thats great so important to preserve our heritage

Another wonder shot of contrast colors between the brown earth and the blue sky!

Beautiful shot of this bridge. Lovely. :)

I love these old covered bridges Steve! I also did a series on these last year! Great to see that there is some money finally being set aside for their maintenance and preservation! Nicely captured! ;-)

Wonderful transformation. Love the grainy wood tones in your image.

what an improvement over the other captures, steve! good to see they are preserving the structure!

Lovely tones of this wood

Great to return and document this.

A very beautiful bridge and information.

Beautiful warm colors that you've captured in this covered bridge. It's nice when you are able to compare it with shots you captured of the bridge previously when it was in terrible shape. Great documentation.

I remember this series very well and was intrigued by every structure. Bless their hearts for bringing this magnificent piece of history back to life! Great image.

Textures add to a look of history

Love the restoration of such a great icon: the photo captures the rare moment in time before that restoration is complete. Well done.