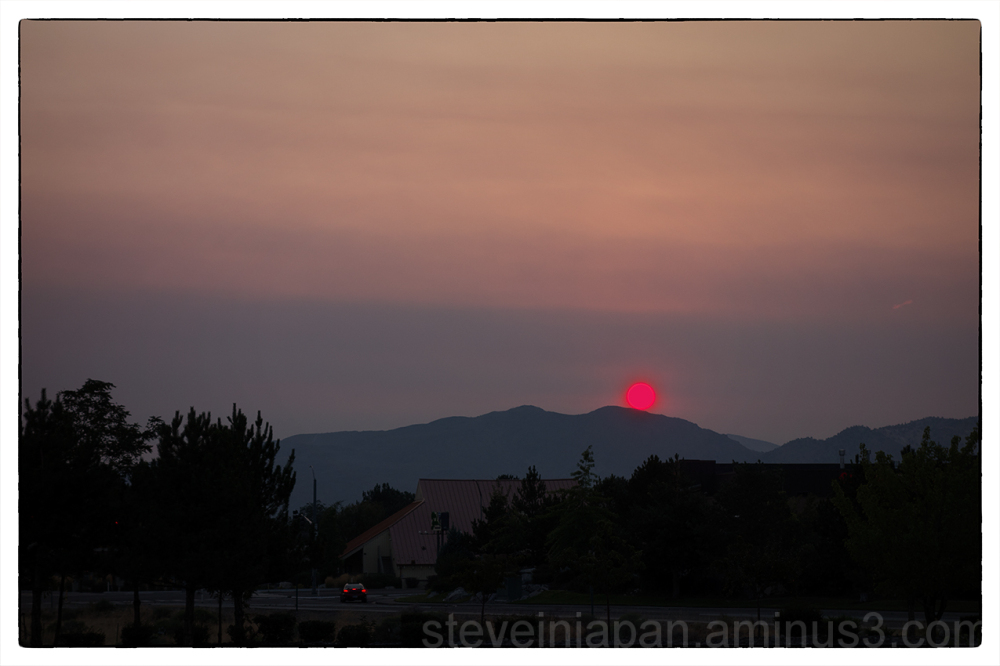 On the way to Sedona, Arizona, we passed through Reno, Nevada. This was late August when the huge wildfire was burning in and around Yosemite National Park. The wind carried the smoke northeast toward Reno. As we left Starbucks, early in the morning, this sight greeted us.

Later in the morning, as we drove US Highway 95 toward Las Vegas, the smoke got thicker as it drifted over the Sierra Nevada Range. The further south we went the more the smoke dissipated and as we approached Las Vegas, signs of the flash flooding my iPhone's weather radio had warned of began to appear.

Excellent capture, composition and the colors are beautiful. I love this red sun appears then the red lights of the car moves away.
Have a good day.

quite stunning and quite eerie ... with a touch of "end-of-the-world" to it !

As a ball put on the mountain in an inflammatory sky! Haughtiness

Beautiful, I left Bakersfield going to Oklahoma made it in 24 hours and ran through every imaginable weather condition on that trip from blizzard and driving snow, through rain and sandstorm.But in the early 70s we never thought of the fires and flooding that takes place today.

A wonderful red disc Steve, we don't see too many like that over here, is that because of the smoke and fine sand grains in the atmosphere?

@Curly: Yes, the smoke was thick.

Wow, that smoke really made the sun stand out - gorgeous image! I'll be curious to see the flash flooding.

A stunning scene with a dramatic story behind it. - Thanks for sharing, Steve.
That was my big scare living in Ausralia - bush fires .......
Kind regards Monika

A superb capture Steve. I love the red sun.

It's a magnificent scenery. Beautiful.

A marvelous shot. Gorgeous colors and very impressive. Have a nice day. :)

What an impressive shot Steve! Almost as if the sun has been bloodied! ;-)

Stunning capture of color! And perfect timing to capture the sun as it rests on (or rolls down) the mountain!

A gorgeous capture of the smoke inhibited sun. It's so difficult to get the sun to be actually red because most sensors blow out making a white sun.

Stunning. A wonderful capture of the Red Sun. Love this. :)

As the sun rolling on the mountain

Stu from From Scotland | Living in 京都 Kyoto, Japan

This is a beauty!

This red sun caressing the mountain is absolutely stunning...and the hues of the mountains are great too.

The shot is absolutely lovely Steve, I enjoy the view and those mountains that bring back fond memories of my own country. I hope to visit and see Arizona one day too. Great!

The red sun runs on the mountain and it is magnificent !

I love this one, the color of the sun echoes the red lights of the car ! Well done Steve.

This image has been featured in 4 Remix collections.

FAVORITES by Eye for Beauty

Beautiful SCENES by Eye for Beauty