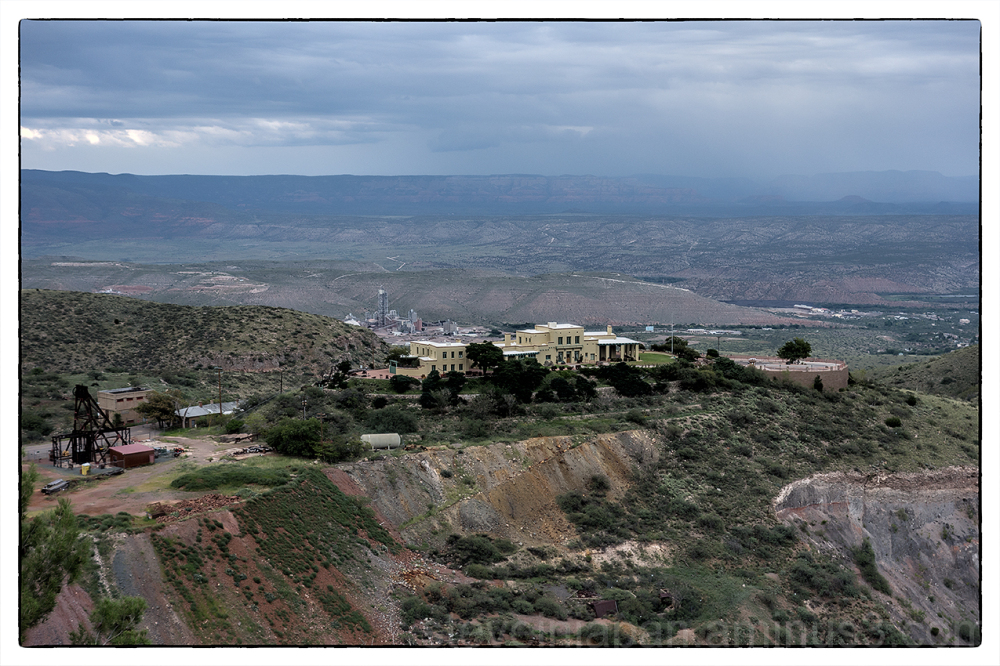 The mansion, now the Jerome State Historic Park, was built by James Stuart Douglas, the owner of the Little Daisy Mine, in 1916. It was the grandest house in town. At the bottom of the frame you can see an open pit and lots of mine tailings. At the left is the Audrey headframe, the largest wooden headframe still standing in Arizona. We'll look around the mansion more later.

Beautiful landscape. It was have to be easy to live in this dry place

It is a very handsome house. It seems that nature is taking theirs back.

Wow - amazing point of view to show the mansion in a world of its own surrounded by the harsh terrain of the mining.

Deep scars make for deep pockets for some, but not all:)

Well...it depends on taste! The owner must have enjoyed rough terrain and solitude (or being gar from the maddening crowds). The general view if stunning, the Earth shows off some of its colours.

Very beautiful photo of this Impressiv landscape and mansion .

Overview and comment interesting on the mining industry which largely transformed the landscapes!

A fine landscape to show us the setting and the impressive house. I find it interesting that the wooden head frame still exists.

Gorgeous point if view to see its surrounding landscape

great extent for this mine!

an impressive estate in depressing landscape! the price of wealth, obviously ...

Wow, wonderful place; great to see all the elements together in one shot and a very impressive view to see the pit!

A very beautiful panorama with an excellent quality of light.

A very beautiful shot of this impressive place Steve !! I love how you captured this, it's very interesting !!!

Nice POV for this lovely landscape.

Indeed is a grandest house!.

It's a superb capture of the gorgeous residence. I like the magnificent landscape as well.