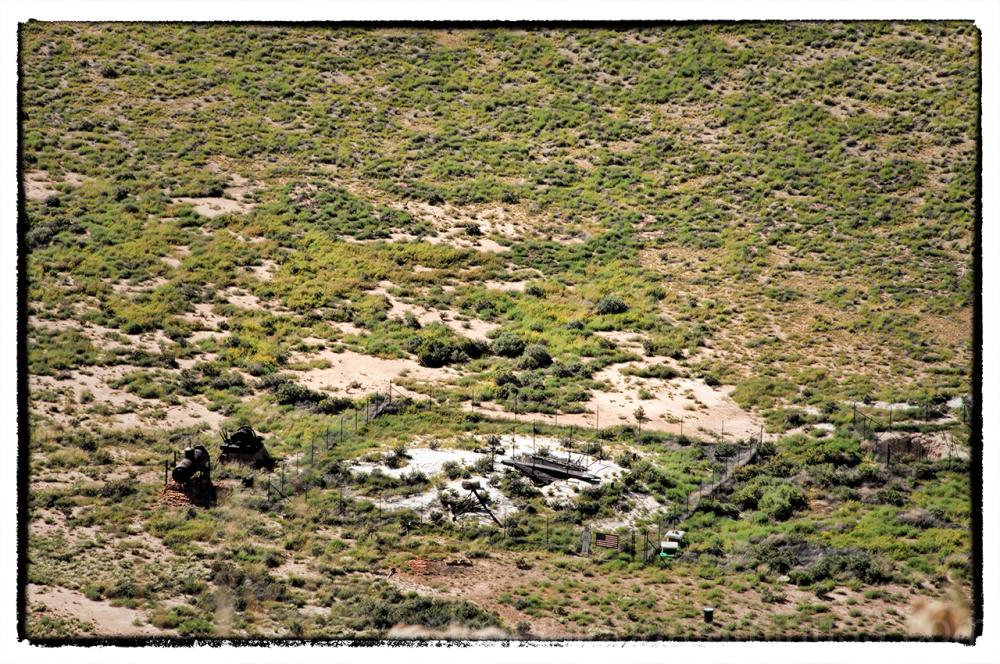 The reason no large iron deposits were found is because the asteroid was largely vaporized or melted into tiny pellets by the extreme heat and shock of the impact. The energy released is estimated in the 10 to 20 megaton range.

A few large fragments broke off, probably before impact, and landed a few miles away. The largest of these is at Meteor Crater.

Here, we see the cylindrical boiler and other machinery, used in drilling, next to the drill site. The flag on the fence is 6 feet X 3 feet (1.8 meters X 0.9 meters) and is barely visible to the unaided eye from the rim.

Fortunately, the meteorite did not hit the city. An interesting commentary.

What a fascinating story - can well understand the how those expectations formed.

Thanks for the great photo and better yet the history lesson.

Did they find pieces of meteorite iron ? Thanks for this explanation.

@Veronique: Yes, they found iron in two forms. One was tiny pellets of melted iron created by heat of the impact. The second was good sized chunks that probably broke off the meteorite before impact and landed a few miles away from the crater. The biggest of these is at the visitors center at Meteor Crater. You'll see it in a couple of days.

Thank you for this interesting narration and lovely composition :)

Incredible view from on high - we can imagine a future meteor strike of such force.

WoW! All that old mining stuff is still there. Quite a place.

The flag definitely gives a sense of perspective to the shot Steve! Nicely captured! ;-)

I had to zoom in several times in order to spot the flag. Thanks for suggesting that. The description of the search was very interesting and informative.

I see the flag - excellent long view from this view point

Beautiful textures captured in this shot! The flag sure helps establish the grand scale seen here. Thank you also for the informative background.

great info to go with this interesting shot! so he was looking not for the pot of gold at the foot of the rainbow, but for the ton of iron below the meteor ... ;-)

Wow.... so he was half right. Really fascinating series!!

What most catches my attention is the huge crater created maybe by the blast pressure, because no meteorite was found on the site ... Very interesting image and fabulous explanation !!!

@Baldwin Vandewalle: Yes, the blast was equivalent to a 10 - 20 megaton nuclear explosion. The crater and rim were formed in an instant. A pressure wave radiated out in all directions for some distance destroying everything in its path. Also, molten iron and rock were falling like rain all around the crater. It would not have been a pleasant place to be.

wow Steve, This is a fantastic shot in large detail !! Very interesting and great text !!

Wow, the detail in the distance!

An interesting, and sad story... what an investment of time and money...