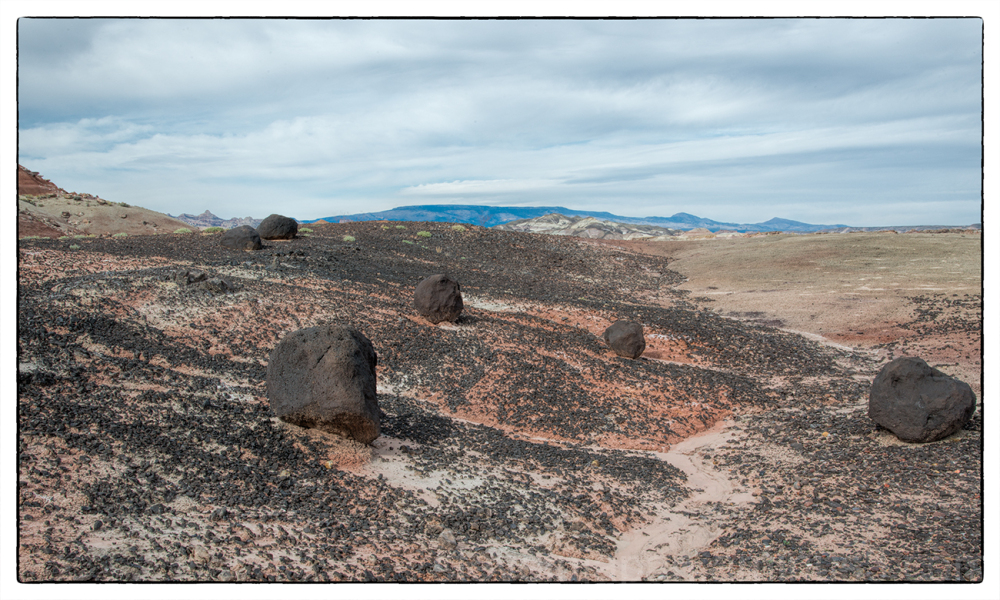 As we continue, these rocks, of volcanic origin, dot the landscape.

Franz found this explanation on the Capitol Reef website: "The rocks are volcanic in origin and came from lava flows that surfaced and capped Boulder and Thousand Lake Mountains approximately 20 million years ago. During the last Ice Age, glaciers capped the mountains and then began to melt. Glacial outwash and mudflows moved the lava pieces into this area. They became rounded from rolling and tumbling during this erosional process." Thanks, Franz.

These big rocks seem constituted by volcanic lava. I like deserts so much sand as stone

Fine image of a rugged landscape.

Is there an ancient volcano nearby? Great pic!

In its own way, it is still a 'living' landscape . . fascinating.

Surprising these stones in the middle of nowhere, the composition is superb. A beautiful desert landscape.
Have a good week

A strange and interesting landscape, Steve --- superb POV ===
Kindest regards and have a good week Monika

(I do not believe that "somebody" carried them there and rolled them downhill !!!)

Indeed, is curious ! Seems a lunar landscape!
I like

It is curious how they are placed throughout the view.

A very interesting picture of these rocks. I would like to hear a geological explanation of how they developed.

captivating cloudy atmosphere and stunning landscape and details. like don, i wondered where these rocks came from and found this explanation (under #8).

@franz: A good find. I've displayed the information above. Thanks a lot.

Quite the big sky

The land that generates stones :)

Excellent image and very interesting explanation for the origin of these boulders.

What an interesting phenomenon you've discovered in these volcanic rocks!! They sure make for an eye-catching landscape! Thanks for sharing!

Awesome, thank you for your explanations

It's impressive how they stand out in this arid landscape ... Beautiful shot and excellent information !!!

What a surreal sight, excellent.

wonderful and unique landscape! once again very well composed scene - i like the spacing of the rocks in the foreground...