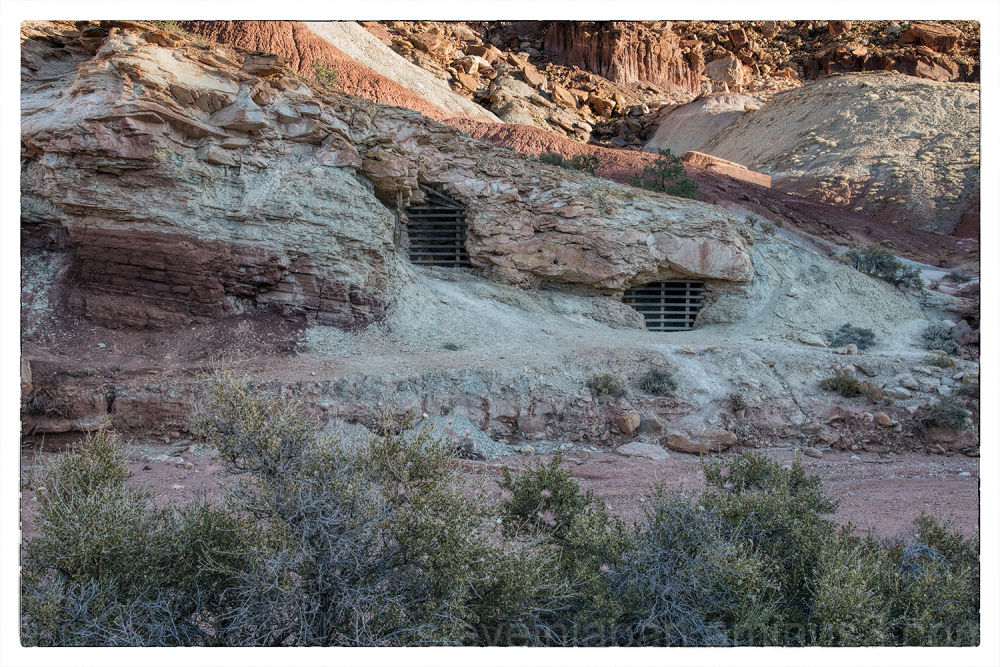 Further south, we come to an abandoned uranium mine. During the hysteria of the cold war, our national park lands were opened to uranium mining. Fortunately, this mine wasn't productive enough for further development.

Certain shortsighted politicians proposed opening the parks to oil exploration a few years ago. A disgraceful disregard of our natural heritage.

I like the light at the top of this photo

Thank God it was abandoned....What a dangerous chemical element this is !!!!!

Can not really say that, fortunately. Mines is certainly space and can be found in the ores from the place where a person has already ruined the landscape anyway.

With the price of oil tumbling, any natural heritage is safe . . for a while.

Interesting to see this and read your note. I wonder if there is radiation there....

Well said, sir. And at least these grates can now easily pass for safety features (?) or am I stretching it just a wee bit as I often do :-) Nevertheless, I like this mage and post very much - and I am really enjoying this look at Capital Reefs :-) All the Best ...

I like the colourful layers in the rock, as if painted. And....putting aside the story about the uranium mine...it looks so much like the home of monks living away from the world... The play of light and shadow makes this shot mysterious.

Fortunately there was not enough Uranium ---- hopefully no oil either !!!!!!!!
Thanks for sharing Steve --- kind regards Monika

An interesting subject. I like how the mines have been barred to prevent people exploring the dangerous mines.

Lovely light - glad it is no longer active

I am confident that the Parks will be kept protected. Excellent illustration.

Thanks for sharing the image and the information.

A nice catch of light

I agree with you. No one should mess with our national parks. Nice colors and textures here.