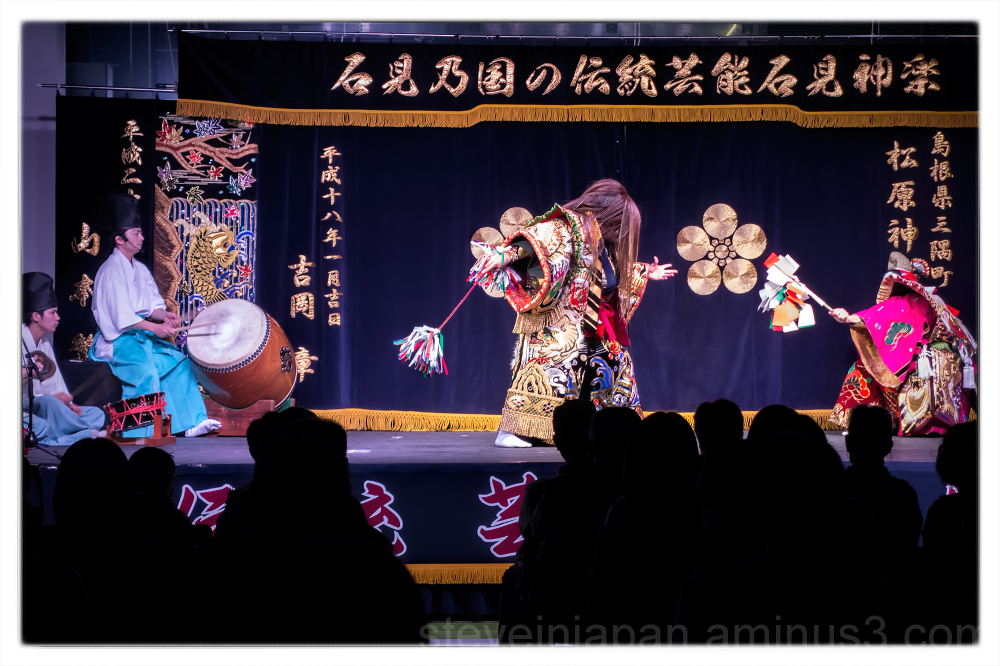 Yoko took me to a most interesting Shinto theatrical dance performance called Kagura. It began as religious art performed by shrine maidens but has branched out over the last thousand years into a folk art.

I got the impression that the performance we saw was acting out folk tales. You didn't need any Japanese language to see a tale of good winning out over evil. We saw three plays actually. There was a lot of loud music from flute and drums as well as high energy dancing. I found the performance both exciting and highly entertaining. The performance was in a hall in the southern part of the city near the harbor.

Such bright and colourful costumes. Like the contrasting silhouettes of the audience.

wonderful capture of this display of Folk Art..So colourful !!!

The silhouettes heighten the interest of the seemingly transfixed audience, beautiful moment !~

A fine picture of this interesting performance. This will provide you with a great reminder of this special event.

Great pictures of theater, colors are beautiful and a perfect composition with spectators in the foreground.
have a good day.

It looks almost like a painting. Beautiful colors and costumes.

Steve, this is an amazing and superb picture - It must have been an interesting experience. - kInd regards and a nice weekend MN

A very colorful performance on the stage highlighted by the silhouettes of the audience in the front ... Fabulous shot !!!

I never heard of this; looks like a great spectacle!