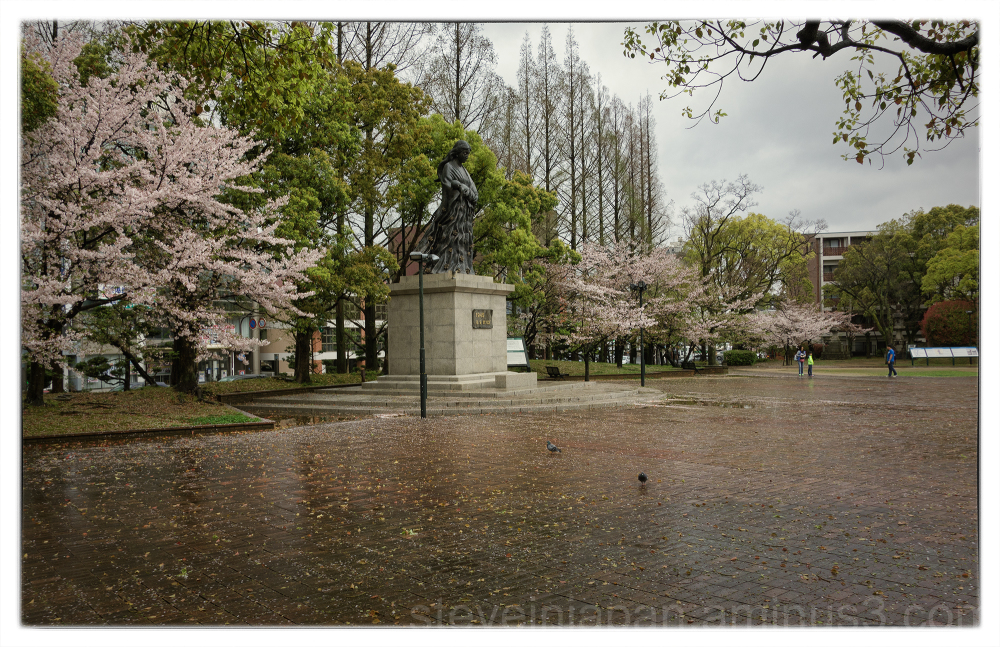 Estimates of the dead vary widely. A couple of sources mention 70,000 killed instantly with another 70,000 dying of radiation sickness. Another source says around 70,000 were killed in total. In any case, these are large numbers for a bomb that missed its target by 1.9 miles (3 kilometers) and the blast of which was confined to the narrow Urakami Valley. The Mitsubishi Arms Plant and the Mitsubishi Steel Works were heavily damaged.

Beautiful park. I like the attractive tone of the flowery trees

A place of sadness... so symbolic with the damp ground, but hopeful with the beautiful blossoms on the trees.

A powerful narrative Steve and it is accompanied so well by this very pretty, yet solemn view of the area here. Your words are so gripping and true. It's what it was and it is not good....Makes me wonder if we should be choosing between who is the good guy and who is the bad, instead of choosing what is the right thing and what is the wrong thing. I suppose we may never know - and that is the saddest thing of all.

Powerful image and story - one we should never forget.

This image conveys sadness today.
It is a great tribute to a day that we must never forget

No more Hiroshima, no more Nagasaki. And I have to say, no more Fukushima.

The floral blossoms stand out nicely on this dreary, overcast day! Seems most appropriate given the subject matter.

A fine documentation of this historic site.

Thanks for sharing, Steve and I have nothing to add to Hiro's comment above. Kindest regards MN

A poignant feeling is captured here. SUch tragic sadness. Oh may we live in peace and harmony instead.

Extreme tragedy, she is so lovely, almost in repose !~

Very beautiful image. The destruction from these two blasts reached a level not seen before. Let's hope they were the last ones.

A beautiful park to remember that tragic moment ... Splendid image !!!

A sad time in history.

A Sad day in the history of mankind. Great shot.