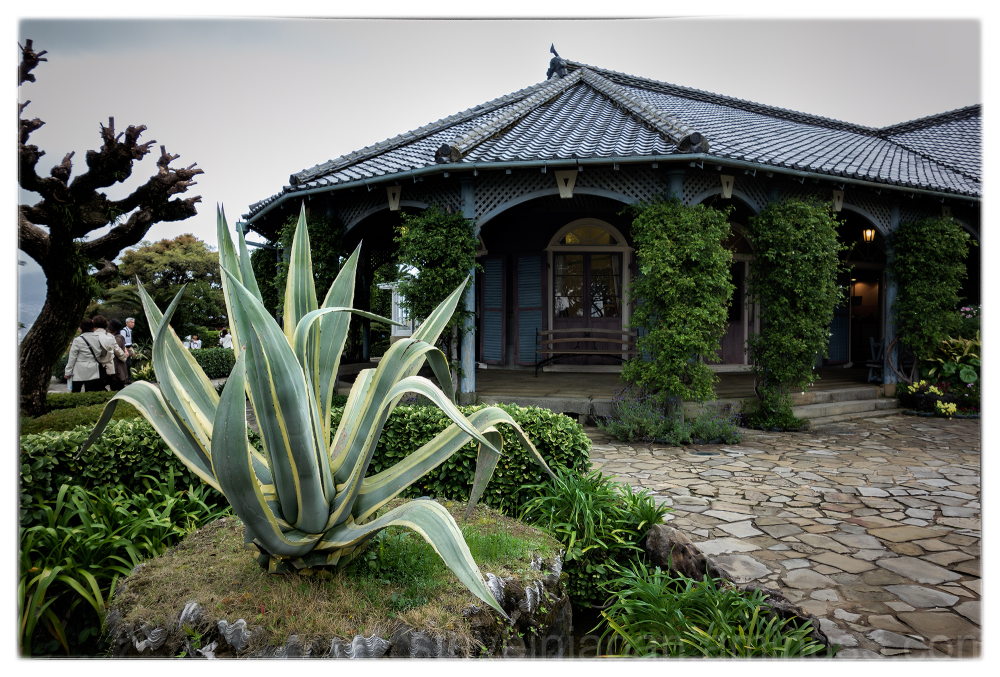 Completed in 1863, "The Glover Residence is noted for its blend of Western and Japanese elements and is an example of treaty port building. This type of architecture closely resembles one-story bungalows used by foreigners in Hong Kong or Shanghai and imported to Japan by British traders." (Wikipedia) In spite of the Western influence, "The basic construction of the house is Japanese . . . . It consists of traditional Japanese roof supports and post-and-beam frames set down on boulders."

Very nice looking yard. On top of a stone large plant is interesting.

Beautiful....with the lovely tiles....
And a nice garden here :)

I Love this house and surroundings...A really cool style if you as k me :-) Although the style, as I recall, does not look like them, it still somehow makes me think of some of the houses I remember seeing in the neighborhoods close to "downtown" Honolulu when we visited there ages ago. Love this Agave (?) plant out front Great plants!! Beautiful shot Steve...dj

Very beautiful architecture and superb house, a magnificent picture, I like a lot.
Have a good weekend.

Wonderful shot of the Glover House. It's interesting that Japanese roof tiles fit with the wetern-style house very well.

Very interestin and beautiful architecture. So cosy. I seen this style of construction at Hong Kong... once upon a time...

I like the difference in brilliant from the plant to the house. The plant stands out extremely well.

The architectural details are really lovely

Ohhhhhh my how sweet the view

Beautiful image of the house.