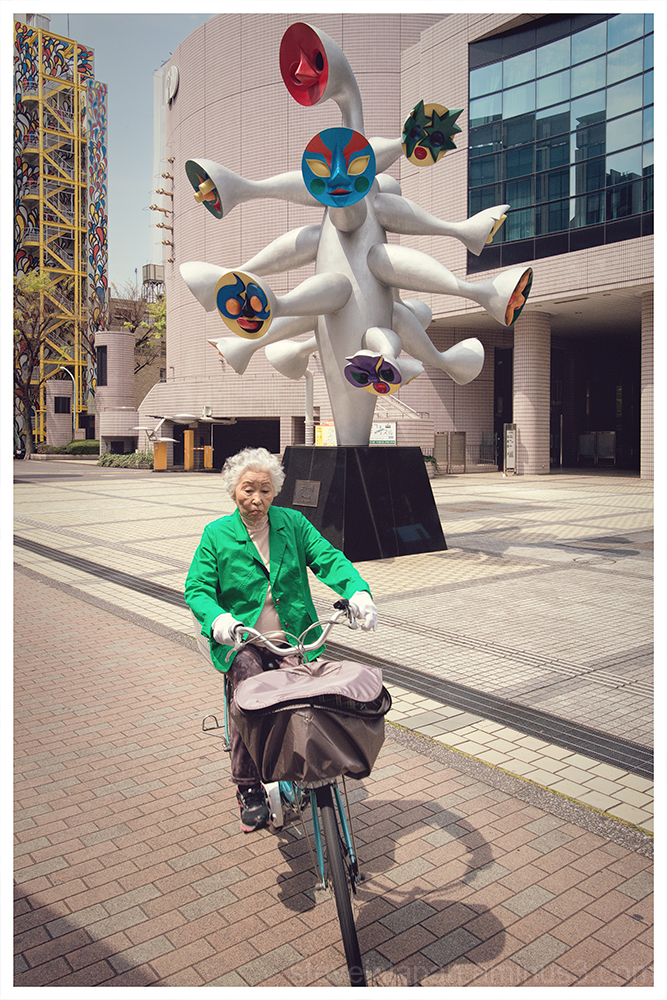 Tree of Children (Kodomo no Ki)

Aoyama-dori intersects with Omote-sando and down this street was a building I was interested in seeing. Along the way, I ran into this curious sculpture that you've seen before. It's by Taro Okamoto, 1985.

I learned that it's in front of the National Children's Castle (Kodomo no Shiro) that is now closed after 30 years. It was a multi-story play space and learning center where kids could play in the big city.

Now I have seen that such a statue can someone do. It is quite spectacular and gives room for thought. Figure combine nicely childhood and adulthood. What's more, brings the statue is a fun .

What a wonderful camera-moment this makes . . a perfect chance composition. Sorry to read of the closure of the Center.

Fantastic image! The color and clarity combined with the strong light are brilliant.

One moment well used.
It's sad to close spaces like this one

The contrast of the unique statue and the lady riding makes an interesting and somewhat strange image.

COntrast of young and old. SOrry to hear it is closed

Great capture of this sculpture and the street . And very interesting .

Excellent composition. Wonderful capture of a scene with an art work and a person.

Balance she sure has ! Love the light tilt of your frame and the whole image !

what a nice image here...The toy sculpture and the aged on a cycle !!!!
Ah! The inevitable change !! sad the centre had to be closed!

This is wonderful, Steve! I love the counterpoint of concepts here - a Tree of Children with one who never ages riding the Bicycle in foreground! This is a GREAT piece, Steve!!