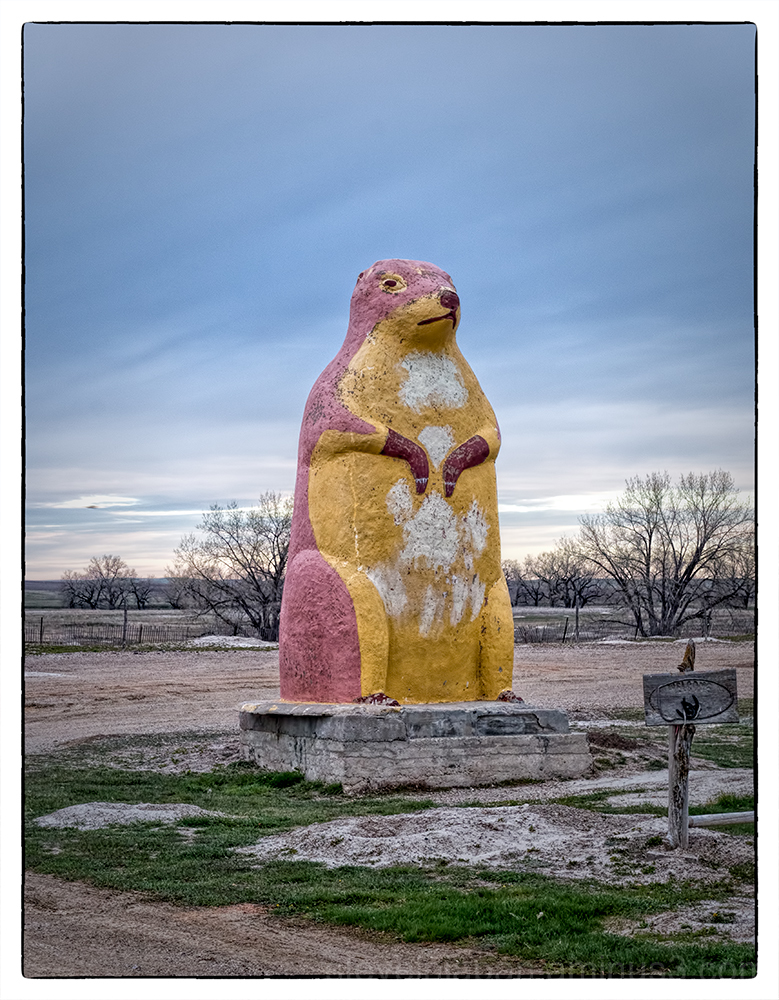 This fellow located at a small store just outside the park is my stand-in for the real prairie dogs at Badlands National Park. I scouted the good sized Roberts Prairie Dog Town and planned to shoot there.

However, I was in the visitors center one day, to ask a question, and overheard the ranger mention something about the prairie dogs to some other visitors. When it was my turn, I asked what she was mentioning about those interesting critters. She said the prairie dogs were in the midst of a plague epidemic that was sweeping through the park's colonies! Even though the ranger played down the danger, I decided "No Way" was I going near them.

TV's nature programs have sometimes shown the life of dog dogs. It is a very interesting creature.

You made the right decision. Prudence is always advisable.
This is a funny statue.

I think you made the right choice. A nice look at the model.

I am sorry to hear about the prairie dogs. this is a whimsical statue and looks great against the sky.

You made a wise choice. Great shot. :)

This is a fine shot of this colorful statue. After the conversation I can see why you stayed away from this particular animal.

Yikes! Sad for the prairie dog, but I don't blame you. This one will do nicely.

I like the color contrast and the white frame.

This is particularly American to me! Reminds me of the kind of thing the Coen brothers might highlight in one of their films...

A wonderful tribute to the prairie dog. That makes me sad that their colonies are being inundated with a plague. I always think of the prairie dog as such an iconic part of the west. Sort of like the buffalo.

Lovely statue! It is so sad to know they have disappeared!

Wow! Good thinking to stick with this painted fellow!