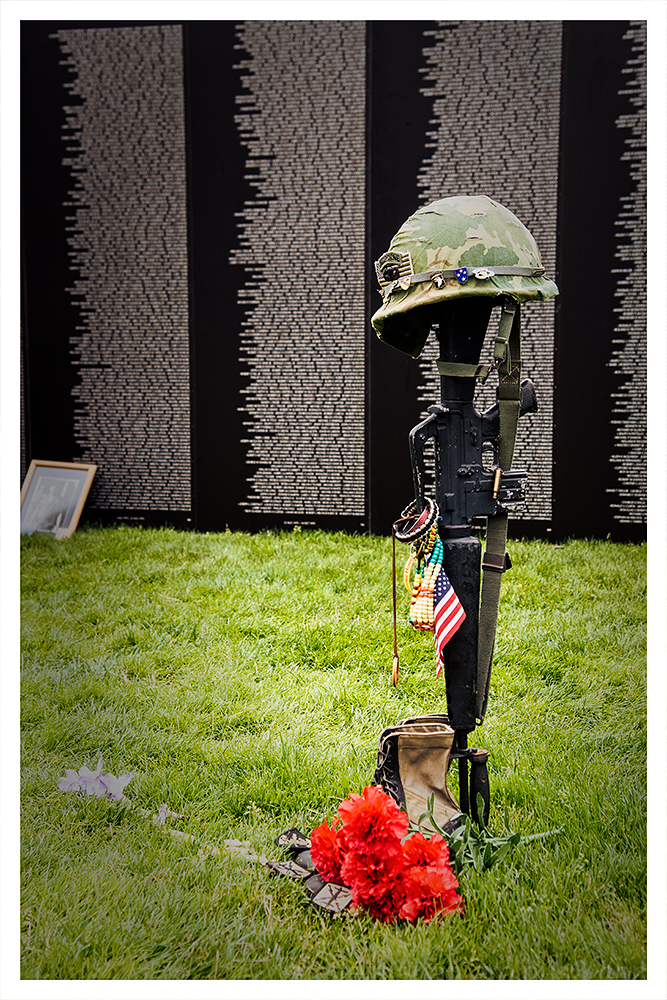 Posted by Steve Rice (Olympia, United States) on 11 November 2017 in Miscellaneous and Portfolio.

A traveling exhibit that is an 80 percent sized replica of the Vietnam Veterans Memorial Wall in Washington, DC. It made a stop, this past summer, near Olympia and we went to take a look. It's a rather moving experience looking at the 58,310 names of men and women killed or missing during the Vietnam war.

Seeing the many names clustered in the time period I was there, I started doing some digging to figure out how many were killed during the year I was in country that spanned parts of 1968-1969. 12,973 were killed during the 12 month period. That's 22.3 percent of the 58,193 Americans killed there during the twenty years from 1955-1975. After figuring this out, I feel even more lucky, especially as an infantry officer, to have made it out alive.

Having said that, the one enduring truth that comes from my experience is the one we all know but may sometimes forget. Simply put, war is a hellish business. There is nothing romantic about it. The aim is death and destruction. Whether you've experienced war firsthand or not, try to watch “The Vietnam War” a film by Ken Burns and Lynn Novick. Besides showing the brutality of that conflict, it shows the politics involved in getting the USA involved there and the pressures that kept us there in spite of the lunacy of that course. It's a brilliant piece of work on that conflict and spans 18 hours spread out over ten episodes on public television in the USA. No matter how much you may know about Vietnam and the war, you will learn a lot from this wonderful documentary.

I came across an interesting statistic the other day:

I think that speaks volumes about American values. We don't like long wars but, we love guns no matter the carnage they may bring.

It's Veteran's Day in the USA. My sincere respect to all veterans everywhere.

A powerful visual for an important day.

The saddest thing is that you do not learn anything about these walls. Every day there is a need to build a new memorial wall

The number of victims of this war is impressive but unfortunately, in the wars of all the countries, none serves as an example to prevent the men from beginning again. Great tribute

A great image for a very important day !

My recognition, gratitude and respect to all of them.
Why don't we ever learn?

A fine picture to get us remember the carnage and cost of a war. I watched the Vietnam series and was surprised how much I learned of terrible management and cost in lives. I'm glad you made it out alive.
I appreciate your service.

It is important to pay tribute to all these soldiers who sacrificed their lives! Great photo!

A wonderful and moving narrative Steve. You were over in Vietnam at the worst possible time. I have watched the first half of the series that I taped. There is so much about the war that I did not know. I was an army nurse in the early 70's. I never went to Vietnam but I did experience the aftermath of it when I worked as a nurse on an amputee ward at Walter Reed. I recently read an interesting article in the NY Times about our country and gun control. It said that the debate ended with Sandy Hook. After that horrible incident, congress still would not pass legislation. “Once America decided killing children was bearable, it was over.”

Steve, this is an articulate and, rightfully so, a broad sweeping post full of magnificent narrative, truthful information, and augmented by a powerful image....No finer presentation have I ever seen. Your work is amazing...
I was In-Country 12/67 to 12/68 and I agree with you, 1968 had to be the worst. As an 11F40 MOS, I was very lucky... VERY lucky.
Now we battle in our own land - with politicians....
I totally agree regarding the Vietnam War series on PBS. So deep and so true.

Thank you Steve - Thank You !!

Great tribute. And a powerful image. :)