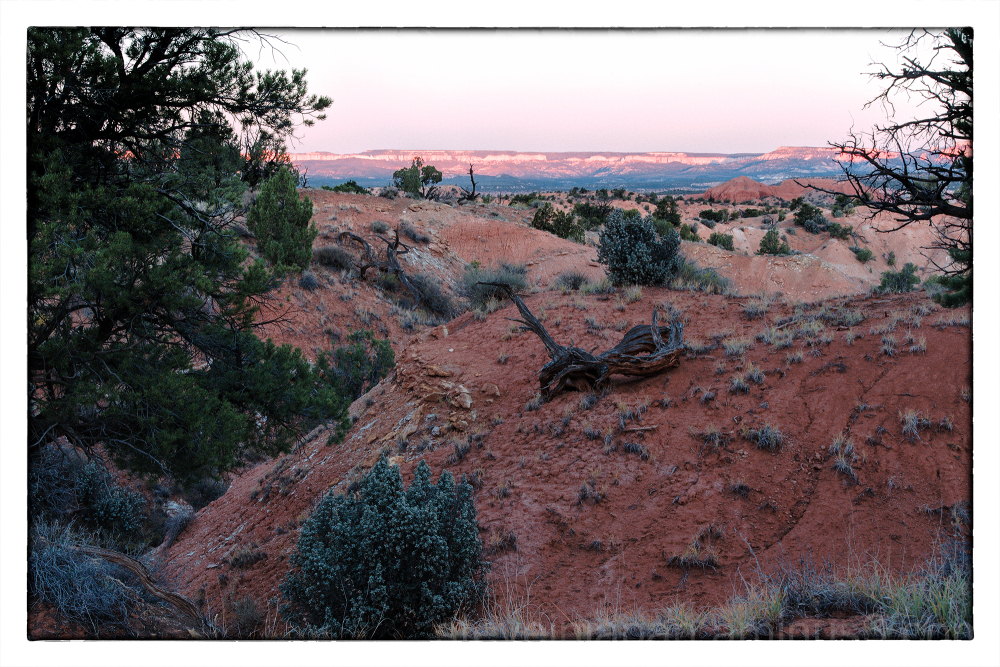 Cliffs of the Grand Staircase

Looking northwest, some of the cliffs of the Grand Staircase catch the early light. The Grand Staircase, that stretches from the Kaibab Plateau in northern Arizona to the Pausaugunt Plateau in southern Utah, is a series of cliffs that rise 5,000 feet (1,524 meters) from the bottom to the top of the "staircase". The pink cliffs here are the top of the staircase at Bryce Canyon National Park.

We should note that Kodachrome Basin State Park is surrounded by the Grand Staircase Escalante National Monument which is a huge and largely wild place. At least, it was when I was there. The current corpulent occupant of the White House has proposed reducing its size by half to allow for the rape of the land by mining and oil interests. It's my understanding that lawsuits are being prepared to challenge this unconscionable action.

For some reason nature is not appreciated as a matter which is absolutely essential to good man's life. I read in the magazine, the White House host had said during the severe frosts that the warmth of the climate was now in use. One should think about where we live if the planet dies due to human activities. It's already very sick.

I like very much the light on the background in contrast with the foreground. A beautiful landscape

Oh, this is amazing !

Lovely light in this fascinating and almost other-worldly landscape.

A fine capture of this colorful landscape. I hope the size of the national monument is not reduced.

I really like the effective composition, with the dark, closeup foreground, and the bright, sunlit cliffs in the distance.
The 'corpulent incumbent' does have dangerously crazy ideas, if I may say so as a 'foreigner' ... :-(

Gorgeous view from the foreground to the background!! Thank you for the background on the Grand Staircase. I couldn't quite grasp it when visiting Bryce Canyon. I hope those lawsuits are filed quickly with regard to the raping of the land. :-)

A spectacular view. I love the pink color. I visited Bryce Canyon many years ago and it was breathtaking. Wonderful narrative information. I would like to visit again before it gets turned into strip mining or some other such thing.

Such an amazing and beautiful scene from a precious are that I am proud to have visited, thank goodness! It is so beautiful. I think it’s despicable what is happening... hoping for a stop to all the madness.