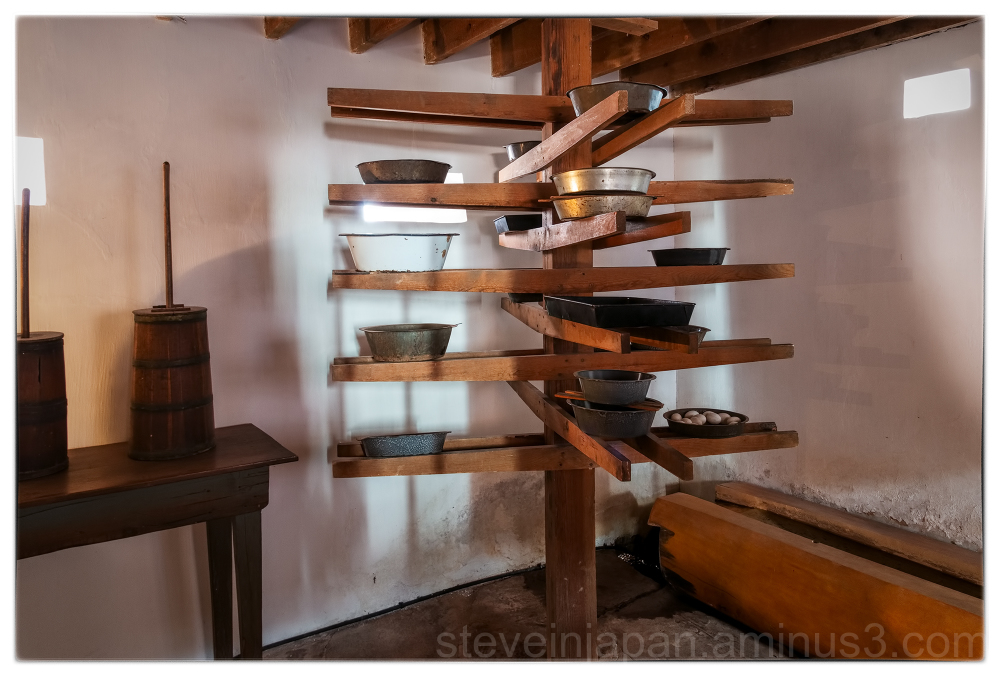 The water from Pipe Spring, under the parlor floor, came across the courtyard, ran through the wooden trough, and exited to the ponds. Since the water was underground from the time it exited the sandstone under the parlor floor until it reached the open trough, it was quite cold. The cooling effect kept the room between 48 - 50 F (8.9 - 10 C) year-round. The room was used for cold storage and butter making.

Ranchers milked 80 - 100 cows each day. Each day, women and children would churn 40 pounds (18.1 kilograms) of butter and make 60 - 80 pounds (27.2 - 36.3 kilograms) of cheese. Some of this was used locally but most was shipped to St. George along with 10 - 30 steers to feed men working on public roads or the St. George Temple. Such shipments happened twice a month and took 4 days travel time.

Excellent image and a great writeup outlining the inventiveness of the settlers.

wow...how interesting all this sounds !! The cheese would have had great taste and smell!!
Beautiful capture :)

Nature has been a big help to human beings in this regard. Keeping food fresh in the warm seasons has been a major problem. That room has been like a large refrigerator.

Absolutely superb. I like the wood and that this is of a magnificent warm color

Superb composition of this fresh ( or cold ) room !

A really interesting image. The settlers were very good at inventing things to help them live. Your information on these images is very interesting.

A fine picture of this special room that has such an inportant role in the production of butter and cheese. An interesting description of the process.

What an ingenious idea for this cooling room!! I love that rack system....it looks like it could rotate. Nice documentary here!

An excellent picture of this room, nice details and very interesting

The community of woods! I really like this one!

somebody really smart thought of that idea

As Always: FANTASTIC Narrative and absolutely wonderful image...The marriage and subsequent presentation of these two factors by you is just outstanding! What an amazing story!Thank you so much, Steve! This is brilliant!!

The way that they cooled the room was an ingenious idea! I cannot imagine making that much butter and cheese. That is an interesting shelf to keep things cool. Great information!

This is original and your angle is excellent.