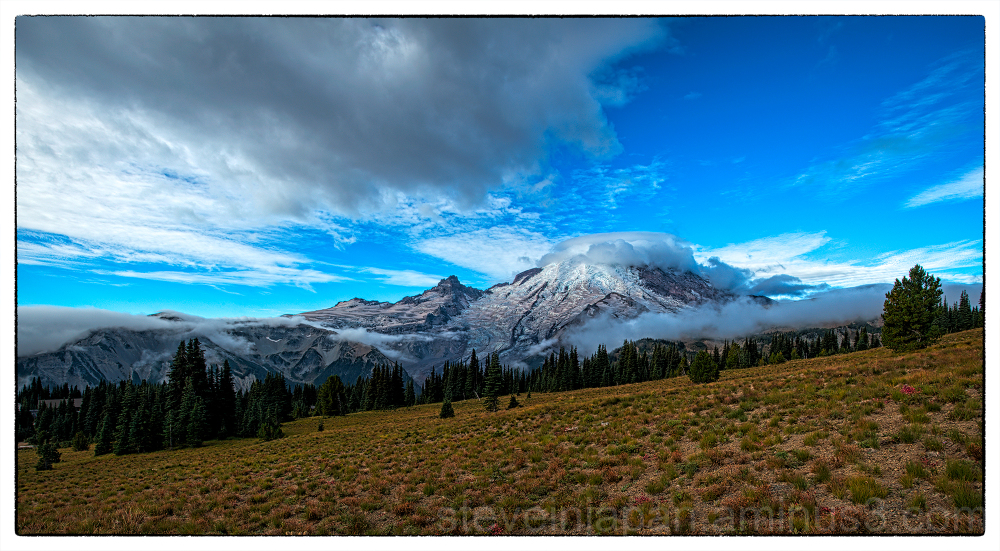 Just Above the Sunrise Visitor Center

A seven frame panorama. A larger version is here.

It's beautiful but is considered one of the world's most dangerous volcanos. Due to its large volume of glacial ice, even a relatively small eruption could create huge lahars that would threaten the valleys around the mountain. I recently saw an article discussing this potential.

Past lahars have filled the valleys in question to 400 feet (122 meters). Three of the four valleys most likely to be affected in the future have dams that might be able to contain or slow the mud flows if there is sufficient warning to allow water levels behind them to be drawn down. However, the Puyallup Valley, home to 80,000 people, has no dams and no probability of one being built.

A major disaster might result if the mountain erupts. It's tiny compared to the result if the super volcano, under Yellowstone National Park, ever erupts. That one could end human life on earth. It erupts about every 600,000 years and it's been about that long since its last eruption. Have a nice day. ;-)

Handsome landscape. Thanks for the interesting explanation and good day for You.

A magnificent landscape ! I didn't know this dangerous volcano ! Thanks for the explanation ! Hope that it remains asleep for a while ;-)

Superb in the bigger frame !!!!

Amazing view ! I envy you.

Wow!! What a dynamic sky to accompany this stately Mount! I am impressed by the seven-shot panoramic. The larger version really reveals great detail!

What an excellent mountain view

A pleasant picture coupled with a disturbing discussion.

That blue sky is compelling!

Lovely scene. We are thinking about going to Seattle for a few days in April. You are reminding me that I should plan on a visit to Mount Rainier.

The mountains are magnificent with the clouds and blue sky! Impressive landscape!

A gorgeous image! I love how the clouds cling to the mountain. This is just beautiful! I have read about both Mt. Rainier and the Yellowstone volcanoes. It is scary to think what a horrendous disaster it would be if either one of them would erupt. Unfortunately it is probably just a matter of time. 5*

Some of the most beautiful places on this planet are in danger zones such as this... that said, what a stupendous image here. Breathtaking scenery and very well presented.