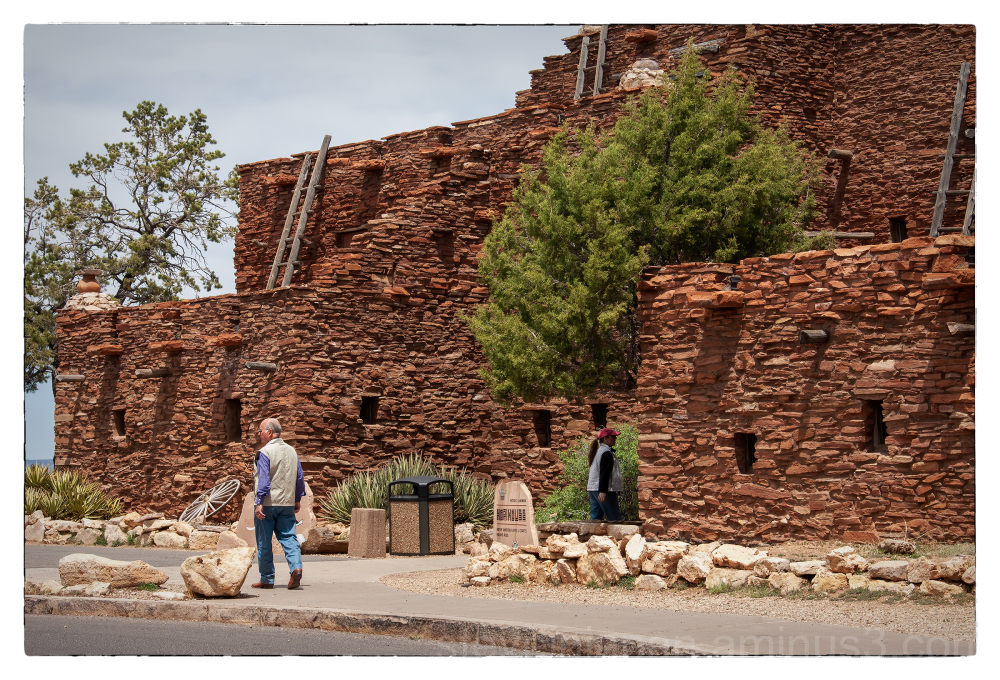 "Hopi House is located on the South Rim of the Grand Canyon, within Grand Canyon National Park in the U.S. state of Arizona. Built in 1904 as concessioner facilities at the South Rim were being developed, it is the first of eight projects at the Grand Canyon that were designed by architect Mary Colter, along with Bright Angel Lodge, Hermit's Rest, Lookout Studio, Phantom Ranch, Desert View Watchtower, Colter Hall and Victor Hall, (the latter two being employee dormitories). Hopi House was built by the Fred Harvey Company as a market for Native American crafts, made by artisans on the site. The Hopi, as the historic inhabitants of the area, were chosen as the featured artisans, and the building was designed to closely resemble a traditional Hopi pueblo. Hopi House opened on January 1, 1905, two weeks before the El Tovar Hotel, located just to the west, was opened." Wikipedia

Beautiful red stones and composition. I like very much the warm colors of this photo and the vegetation which brings a touch of green to the composition
https://passionmontagnes.wordpress.com

Gorgeous color and textures captured in this shot!

Amazing shot..I love this building ... built with huge stones...Thank you for all the information :))))

That's lovely craftmanship, Steve... I do wonder though, if the tree was there back then and they left the space for it, or if that's a recent development... :)

This makes me want to know more, see more.

Beautiful photo of the place .

I have such fun memories of the Grand Canyon. Years ago we hiked to the bottom and then spent 7 days whitewater rafting through the canyon, and sleeping out under the stars at night. It was amazing.

Can you actually get in them.