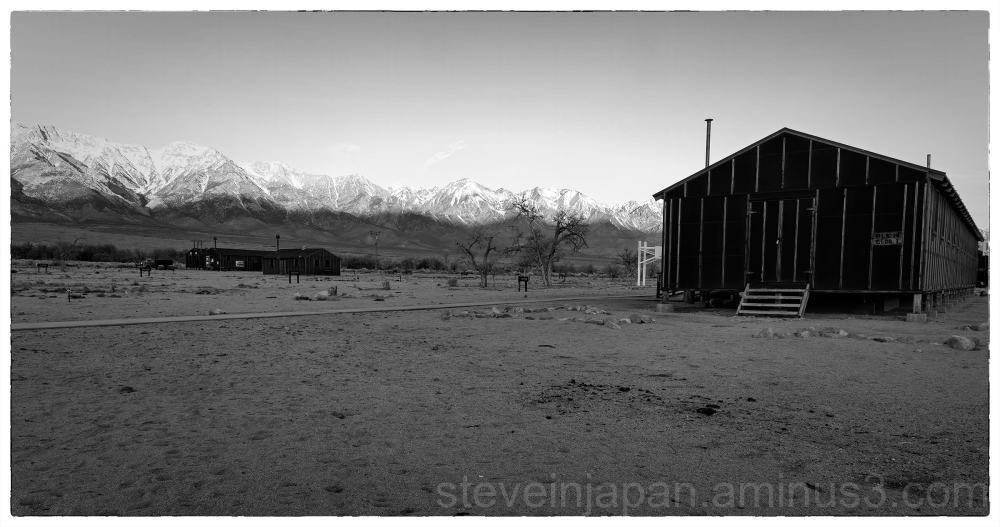 On Valentine's Day 2020, I visited at sunrise. It's beautiful at the foot of the Sierra Nevada Range. It was also bitterly cold. In summer, it's incredibly hot. It's usually quite windy.

This is Block 14. The nearest building is a reconstructed barracks made of wood and tarpaper. The building further back is the women's latrine and beyond that the mess hall. The mess hall is not a reconstruction. Rather, it was built at Bishop Air Base in 1942. It's been moved here and restored since it was built exactly like those in all the camps. The winds would blow sand up through the floor boards of the buildings. People would wake up in the mornings covered in sand and dust.

Each block had 14 barracks. In addition to the buildings mentioned above, each block had a men's latrine, laundry room, ironing room, etc.There were 36 blocks to house the 10,000 internees. Two-thirds of these internees were native born US citizens. They were loyal Americans like those of any other ethnicity. All these structures were within an area of one square mile surrounded by 5 strands of barbed wire and eight guard towers manned by military police armed with machine guns.

Shortly after the end of WW II, all the buildings in the camps were either sold and moved or torn down and sold as scrap lumber.

Not a single person, of the 120,000 detained in the concentration camps, was convicted of espionage or sabotage. "The very fact that no sabotage has taken place to date is a disturbing and confirming indication that such action will be taken." – Lt. General John L. DeWitt, formal memorandum to the Secretary of War, 1942. That sounds like the reasoning of a dedicated racist.

BW is perfect for this sad subject of american history
https://by-marie.fr

Stu from From Scotland | Working in Kyoto, Japan

A stunning scene with a disturbing story.

Sunrise is always great to see.

: Helen : from who is currently photographing in, Australia

Thanks Steve. Super photo and also a sobering story. Thanks for documenting it, I had never heard of this place.

mE from Middle Franconia, near Nürnberg, Germany

Superb composition with the mountains in the sun .

Excellent capture of light over the mountains Steve.

That piece of history was really disturbing and sad !!
When one looks at the image after reading what you have writte, the image looks scary and sad and full of tears !

Fantastic mountains. Nice image with dark hut on the right.

A fine picture of the buildings in this sad part of our hsitory.

This white peaks are great.

A stunning backdrop illuminated in the beautiful light! The desolation here is very apropos given its history. Thank you for the background information.

I cannot imagine living there in the cold of winter.

Interesting shot. That whole thing was just so wrong.

Powerful story. Thank you. And the BW photo makes the message even stronger.

The Story and the quote tat you present, above, just enter my heart with strength! I am really taken by this Post and all of your others here....
Thank youSteve.